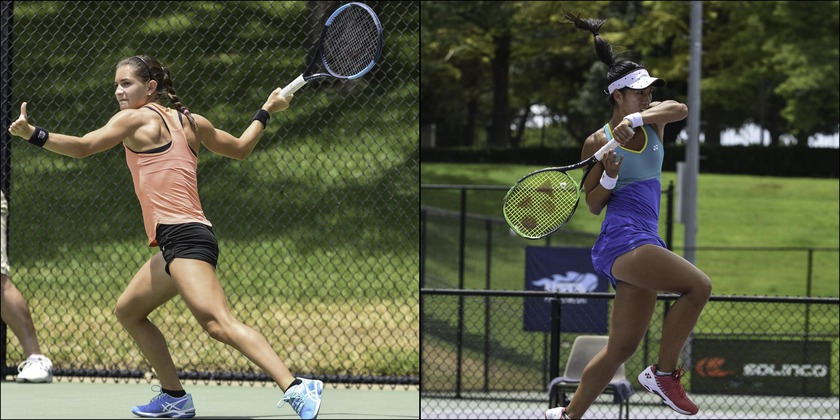 FORT WORTH, Texas (August 4, 2018) – 2016 Fort Worth doubles champion Chieh-Yu Hsu was able to repeat as title holder at the 2018 Fort Worth Pro Tennis Classic $25K Women’s Pro Circuit Event by pairing with Marcela Zacarias of Mexico for the three-set victory in the doubles final on Saturday at the Bayard H. Friedman Tennis Center on the campus of TCU.

For the first time in tournament history, the top two seeded pairs battled it out in the finals with the No. 2 seeded duo of Hsu and Zacarias ultimately coming out on top against the No. 1 seeded pair of Ayaka Okuno of Japan and Olivia Tjandramulia of Australia. Hsu and Zacarias needed three sets to take the crown as they fell behind early in the opening set for a 6-3 loss. The duo were able to force a tiebreaker in the second set and used the momentum to win both tiebreakers and take the match, 3-6, 7-6 (6), 10-6. This marks the second title in 2018 for the duo as they paired up to win the doubles crown at the $25K even in Curitiba in February.

Saturday also saw the singles semifinal matches take place with two seeded players from the United States earning straight-set wins and spots in the final. Former UCLA All-American and No. 333 ranked Robin Anderson used early breaks to take out the only qualifier left in the draw in No. 720 ranked Paige Hourigan of New Zealand, 6-3, 6-3. Anderson advances to a singles final of a pro circuit event for the first time since claiming the $25K crown in September 2017 in Redding, Calif.

Anderson will face young American and No. 342 ranked Maria Mateas who will be making her second straight appearance in a singles $25K final after advancing to her first in Baton Rouge in June. Mateas, an incoming Duke freshman, did not falter once during the match and used six breaks in the match to cruise to a 6-0, 6-3 victory over No. 717 ranked Dominique Schaefer of Peru. The 19-year-old will be looking for her first singles pro circuit title in her career.

The Fort Worth Pro Tennis Classic $25K USTA Pro Circuit event will be held at the Bayard H. Friedman Tennis Center on the campus of TCU from July 29-Aug. 5. The main draw portion of the tournament will conclude with the singles final on Sunday at 10 a.m. Professional athletes from around the world will be competing for $25,000 in prize money, as well as valuable WTA Tour Ranking points.

About the USTA Pro Circuit
With approximately 90 tournaments hosted annually throughout the country and prize money ranging from $15,000 to $125,000, the USTA Pro Circuit is the pathway to the US Open and tour level competition for aspiring tennis players and a frequent battleground for established professionals. The USTA launched its Pro Circuit 39 years ago to provide players with the opportunity to gain professional ranking points, and it has since grown to become the largest developmental tennis circuit in the world, offering more than $3 million in prize money. Last year, more than 1,000 men and women from more than 70 countries competed in cities nationwide. Andy Murray, Maria Sharapova, John Isner, Sloane Stephens, Kei Nishikori, Victoria Azarenka, and Sam Querrey and are among today’s top stars who began their careers on the USTA Pro Circuit.